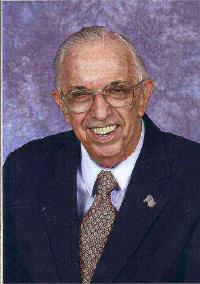 James Kenneth Tabb
James was born at Blakely, Early County, Georgia, on 16 November 1925. He married Rosalie Yancey on 22 December 1946. James Kenneth Tabb died on 7 June 2011 at DeKalb General Hospital, Decatur, Georgia, at age 85. J. Kenneth Tabb, 85: Scouting mentor to many
By J.E. Geshwiler
For the AJC
When Kenneth Tabb in 2003 received Scouting's highest honor for adult leadership, the Silver Beaver award, he got numerous letters from Scouts whom he had mentored as long ago as the 1960s letting him know what a positive impact he had on their lives.
"The letters meant more to Dad than the award," said his son, Tom Tabb of Conyers, like his father a Scout leader and like his two brothers, Bob Tabb of Covington and Jim Tabb of Dade City, Fla., an Eagle Scout. Similarly, their late sister, ElaineTabb Mullinax, attained the Girl Scouts' highest rank.
A measure of how much the senior Mr. Tabb valued Scouting, said Bob Tabb, "is how long Dad continued to guide Scouts years and years after my brothers and I grew up."
Mr. Tabb's specialty was giving civics lessons preparing Scouts to earn merit badges for citizenship.
"Dad was devoted to our country and its institutions of self-government," said Tom Tabb. "Over the years he took hundreds of Scouts to public meetings of the Georgia legislature, county boards and school boards. He would tell them beforehand what to look for and answer their questions afterward about what they had observed."
Mr. Tabb wasn't averse to the more rugged aspects of Scouting. Bob Tabb recalled hiking twice with his father to the top of Blood Mountain, Georgia's second highest. " It was hard enough for a kid to do it, harder still for a middle-aged man, but Dad did it," he said.
Tom Tabb said that on many a camping trip his father also accepted without complaint half-cooked food grilled over an open fire and summer heat that he, a native south Georgian, never got used to.
Mr. Tabb didn't devote his time entirely to good-citizen Scouts. For several years he was a volunteer providing counsel to young probationers in DeKalb County.
"Ten years ago," Tom Tabb said. "Dad received a letter from one of them saying he had straightened out his life, had married and started a business, all of which he credited to the encouragement and direction in life that Dad had given him."
J. Kenneth Tabb, 85, died Tuesday at DeKalb General Hospital of respiratory failure. His funeral is 1 p.m. Saturday at Briarcliff United Methodist Church with interment to follow at Floral Hills Memory Garden. In lieu of flowers, the family requests that donations be made to the church, 4105 Briarcliff Rd. NE, Atlanta, GA 30345. A.S. Turner & Sons funeral home is in charge of arrangements.
Born and reared in Blakely, Mr. Tabb attended Georgia Tech before entering the U.S. Army Air Corps in 1944 and serving at a base in Texas. Jim Tabb said his father later joked with his family that he never allowed the forces of the Japanese Empire east of the Mississippi.
After World War II, Mr. Tabb completed his schooling at Emory University and began his career in business managing an auto service store in Decatur. "One day one of his customers suggested Dad should go into insurance, and not long afterward, Dad did," said Jim Tabb.
"Dad started his insurance agency from scratch," said Tom Tabb, "combing newspaper wedding announcements for prospective customers with our mother's help, calling on them to sell insurance for the gifts the newlyweds had received or life policies for breadwinners. When Dad returned from a sales call with a barbecue sandwich in hand for Mom, that was his signal that he had made a sale. We've instituted an annual Barbecue Sandwich sales award at our agency to honor that custom."
The agency has grown to five metro locations and 6,000 clients, Tom Tabb said.
For nearly as long as Mr. Tabb was a Scout leader, he was a bedrock for the Briarcliff United Methodist Church. He was chairman of its board of trustees, founder of a young couples class, a tenor in its choir, a Sunday school teacher and its historian, writing a book about it titled, "The Birth of a Church, 1960-1998."
Its current pastor, the Rev. Lisa Derrick, said Mr. Tabb held every leader's position the church has. "He did the hard work of leadership -- not just presiding over meetings but preparing beforehand, listening to diverse opinions. He was such an exemplary person that he brought out the best in others," she said.
Survivors also include his wife of 64 years, Rosalie Tabb, 12 grandchildren and nine great-grandchildren. He was buried on 11 June 2011 at Floral Hills Memory Garden, Tucker, Georgia.