William Bobby Tabb
William was born at Miller County, Georgia, on 1 November 1935.1 He died on 10 December 2014 at Thomasville, Thomas County, Georgia, at age 79. Mr. Tabb was retired as school superintendent of the Mitchell County School System. He began his professional career in l958 in the Grady County school system as a physical education and history teacher and also coached baseball. During the summers he assisted with the Cairo’s recreation program. In l962 he moved to Mitchell County as Camilla’s recreation director. Because of the strong recreation program he developed, the Mitchell County School System benefited and its teams captured many state titles. Numerous players went on to earn college and professional recognition.
#In l972 he became employed with the Mitchell County school system as a physical education instructor, rapidly advancing to the posts of Vocational Director and Principal. He was subsequently elected to two terms as Mitchell County School Superintendent. Under his leadership he oversaw the construction of the present middle and primary schools and retired leaving a surplus in the educational financial account.
#His educational credentials include a BA degree in history from Tennessee Wesleyan College, Athens, Tennessee; a MA in Physical Education from Murfreesboro State College, Murfreesboro, Tennessee, and a MA in Supervision and Administration from Valdosta State University. He attended college on athletic scholarships, and was recognized as Little All American in the Holston Conference while playing defensive guard on the Tennessee Wesleyan Football Team
#Mr. Tabb was a member of the Georgia School Superintendents Association and the Georgia Association of Educators. He served on the Board of Directors of the DeSoto Trail Regional Library in Camilla and was a member of the Camilla Lions Club. He was a member of First Presbyterian Church of Camilla, where he served on the session as an elder and financial officer.
#While in good health, Mr. Tabb was an avid outdoorsman - well known for his fishing knowledge and skills . It was said that “Bobby Tabb could fill two coolers when others couldn’t catch a single fish”. He also enjoyed a good, challenging game of cards with close friends. He demonstrated his love of history by restoring the 1886 home place on his Centennial Family Farm in Miller County, now a gathering place for family and friends.
#Survivors include his wife of 56 years, Joy Allen Tabb of Camilla, and his four children: a daughter, Patricia Ann Tabb of Las Vegas, Nevada; three sons, Mark Allen Tabb of Las Vegas, Nevada, William Tracy Tabb and wife, Rebecca, of Thomasville, Georgia, Thomas Wright Tabb and wife, April, of Bainbridge, Georgia; eight grandchildren, William Blake Tabb of Athens, Georgia, Amy Nicole Lourenco of Las Vegas, Nevada, Zack Tabb of Brunswick, Georgia, Masey Alexandria Tabb of Bainbridge, Georgia, Katherine McLendon Tabb of Thomasville, William Gamble Tabb of Bainbridge, Georgia, Emily Bateman of Thomasville, Georgia, Ember Thompson of Forney, Texas; and one great grandson, William Tiger Tabb of Athens, Georgia.
#William Bobby Tabb touched the lives of many people during his time here. “The one thing that can’t be taken from us, even by death, is the love we give away before we go”. ( Forest Church.) He was buried on 19 December 2014; He was not buried as his body was donated to science. 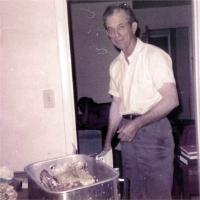