M, b. circa 1836, d. before 1869
Vamily tradition says Riney L. Cleaveland was shot dead at the dinner table by a former slave who climbed through a window and shot him at point blank range. This was told to me by my great aunt Bessie Parker Case the daughter of mary Lee Cleaveland Parker. 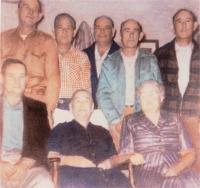 Henry went home to Georgia once to visit his mother. On his way home on the train he was exposed to the measles. He was sick with the measles while at home with his mother. After returning to Texas he learned that his mother had taken measles and died. 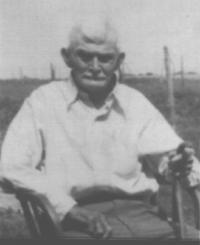 Last rites were held Friday afternoon at 2 p.m. at the Cobbs Creek Baptist Church for George M. Tabb, 90 who died in his sleep Nov. 13 at the home of his daughter, Mrs. Frank McVey, of Madisonville. He had been in ill health for two years.

Mr. Tabb was born June 26, 1862 in Colquitt, Ga. He was married to Miss Jo Emma Adams Dec. 25, 1892 in Montgomery County, Texas. He had been a farmer until his retirement several years ago and had also been a member of the Baptish Church for many years.

Rev. J. A. Hosea, pastor of the Baptist Church of Chandler, conducted the services assisted by Wyatt Sawyer, minister of the Madisonville Church of Christ. Interment was in the Alphin Cemetery under the direction of Riddle Funeral Home.

Among those from out-of-town attending the funeral were Mr. and Mrs. Mose Brooks, Mr. and Mrs. Walter Plunkett and George Catoe of Houston; Mr. and Mrs. Nolan Tabb of Bryan and Mr. and Mrs. Harve English and daughter and Mr. English's sister, Omie.