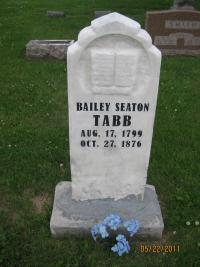 Grave of Rev. Bailey Seaton Tabb
Rev.'s occupation: Minister.. Rev. Bailey Seaton Tabb is said to have had 16 children, 8 by each wife. Extensive reserarch has been done on his first wife, nothing on his second. Records of these children are from the 1850 census of Hardin Co. and Hardin Co. Marriage records. Rev. was born at Berkeley County, Virginia, on 17 August 1799.1,2 He married Sarah L. Gunterman at Hardin County, Kentucky, on 2 August 1819. He married Sarah Ann Gray at Hardin County, Kentucky, on 29 June 1839. Rev. died on 27 October 1876 at Cass County, Missouri, at age 77.1 His body was interred after 27 October 1876 at Freeman, Cass County, Missouri, at Freeman Cemetery. 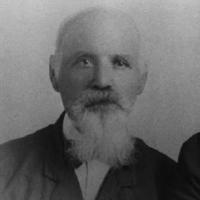 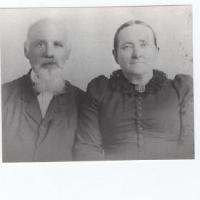 The story, as I remember it told by my grandmother Evaline Wade (Price) wife of John Buckner Tabb, Aunt Ruth and Aunt Lizzie, as they remembered it told and talked about in the family as they grew up, by their grandmother who was her daughter (Nancy Gunterman who married Samuel Price.)

Elizabeth Rawlings was the daughter of Edward.

About the middle of September 1792, a roving band of Indians made their appearance in what is now Hardin County, KY., tried, under renegade Simon Girty to run the white settlers out of Kentucky, and committed raids on settlers, robbing them of food, etc. The settlers went to the forts with their women and children, and then the men would go to drive the Indians back across the Ohio River into the Northwest Territory.

The Hart brothers were known as the best Indian fighters in the country. Miles Hart, Husband of Elizabeth Rawlings was, perhaps, the best of them, because he was so deadly with the rifle the Indians had called him "Sharp-Eye". The Hart brothers married the three Rawlings girls, daughters of Edward Rawlings, namely: Miles married Elizabeth Rawlings, Josiah married Ann Rawlings, and Silas married Letitia (Letty) Rawlings.

The Hart brothers and the other men of the settlement drove the Indians across the Ohio River at a point about West Point today, but in doing so, Miles Hart, or "Sharp-Eye" as the Indians called him, had killed the Chief. With the chief dead, the settlers thought perhaps the raids would cease so they returned to the VanMeter Fort where Miles Hart had his wife and his three children, aged 7 or 8 years. The family returned to their home, a crude log cabin that Miles had built on a clearing nearby. The log cabin had only a small window and a solid door so there was little light in it. At night the log-burning fireplace and a candle furnished light.

In the morning as they were about to eat their meager breakfast, they opened the door to let in more light. The Indians who had followed them back to their home had been prowling around the cabin of Miles Hart all night waiting for an opportunity to kill him in revenge for the loss of their chief. They pounced upon Hart and killed him after a desperate struggle, thus avenging the death of their chief.

Joe Hart, the 12 year old son of Miles Hart, grabbed his father's rifle and tomahawk hatchet and killed the Indian leader, who was the chief's brother, and several other savages before they could overcome him. He struck them as they tried to enter the door to the cabin to take his mother and the children prisoners. The Indians, however, carried Elizabeth, Joe and the two smaller children into captivity.

They killed the little girl just a short distance from the cabin because she cried and the Indians were afraid the followers would hear her. They killed Miles, Jr. because he had a sore foot and couldn't keep up. They were in a hurry for they knew they would be followed as soon as the other settlers found out what had been done, and they knew the fury of the Hart brothers.

This left Joe and his mother the only captives and she was ready to have another child and could hardly keep up. She was required to carry kettles and cook for the Indians. She finally had the baby in the snow unattended, and was made to resume the march the next day. She carried the baby strapped to her back and also some cooking kettles. During the day they waded waist-deep across an ice-filled creek. Elizabeth was considered a delicate woman of her day, according to Haycraft's History of Elizabetht own. He says: "Mrs. Elizabeth Hart, wife of Miles Hart, was regarded as a very delicate woman for those days. She was enceinte when taken prisoner in an advanced state. She was burdened with camp kettles and other Indian plunder. The crossed the Ohio River into the Northwest Territory. At nightfall she was delegated to kindle fires for the Indians and then to go aside to kindle a fire for herself, raking up as best she could rubbish from under the snow and t here alone, unaided by the kind assistance kn own to civilized life, was delivered of a son. The squaws then showed a little kindness in the morning by giving her a little water in which a turkey had been boiled. Then cutting a block from a tree, they wrapped a piece of blanket around the new-born infant, fastened it to the block and laid the block upon her back with camp kettles, etc., and pursued their way north. In the course of the day they waded a river waist-deep (filled with ice) and yet strange to tell, she experienced no seriou s inconvenien ce, but from hard usage and inhuman treatment the child died at the age of six months. She lingered in captivity and wretched slavery for several years until a trading Frenchman at Detroit purchased her from the Indians and restored her to her relatives."

The mother and Joe separated after they crossed the Ohio River, the raid having been made by several tribes of Indians from the Northwest Territory. Joe was taken in one direction and his mother in another, she ending up in Detroit or near what is now Detroit.

The Indians had meant to burn these captives at the stake because the husband and father had killed on of the Chiefs, but Joe was saved because a squaw was impressed with the youth's bravery and pleaded for his life, thus saving him from a fiery death. The mother, Elizabeth, was saved because a chief decided he might marry her, but she steadfastly refused to do this.

After several years of slavery the Indians did not watch her so closely and she persuaded a French trader to buy her, promising him that her family would pay him if he would return her to her home and relatives in Kentucky. As he was going in that direction south, he did help her and returned her to her home and family.

Grandma Tabb told more of the story than related by either Haycraft or Collins. She said that when the baby was six months old it died from the hardships and Elizabeth dug a grave and buried it. The next morning as she went to fetch water (this was part of the hard work she was required to do around the camp every day) she found the baby lying in her path. The Indians had disinterred the body and placed it there. She took the baby and buried it, but the next morning as she went to the spring to carry w ater, there was the baby's head in her path, the Indians had cut the head from the body. She again took the baby and buried it again but the following morning as she went to the spring and as the head had been put in her path again, she realized she would be taunted by this as long as she showed she cared, so she just took her foot and pushed the baby's head out of her path and went on her way. After she did that, she never saw the baby again and she supposed th at they buried it.

Joe had been rescued by his uncles, the hart brothers, who had organized bands to help them look for Joe and his mother. He never married, but went to Missouri with Grandma Tabb's father Samuel Price and his sons. They went there to take up land and settle that territory after the death of Samuel's wife, Nancy Gunterman Price, who was Joe's half-sister. Joe's grave is in Missouri with that of Samuel Price in the New Salem Baptist Church Cemetery.