Pliny Fitch Southwick and Cornelia Wilson Tabb.
MRS. CORNELIA WILSON (TABB) SOUTHWICK was born in Berkley Co., W. Va., near Martinsburg, March 13, 1850. She purchased another home at Fair View, Jefferson Co., on the Opeaquon Creek, near Charlestown, where her family moved a year later, the place rendered historical by John Browrfs trial, and where her father, George Washington Tabb, served in this trial and wrote his verdict; also a noted place of numerous confficts during our late civil war. She was educated by private teachers until during the war, when she completed her education at Ann Smith Academy at Lexington, Va. Remaining at home until her family moved to Harrisonburg, where she had numerous opportunities of travel and gratifying her taste for literature, she married Pliny F. Southwick Sept. 11, 1878, but died April 13, 1880, having attained the type of a true and lovely woman at an early age.

The following graphic account, from the Lynchburg Virginian, of the marriage in this place of Mr. Pliny F. Southwick and Miss Cornelia W. Tabb, youngest daughter of our worthy townsman, G. W. Tabb, Esq., will be read with much interest by the many friends of both parties in Harrisonburg:

DEAR C. - When I arrived in Harrisonburg two months ago "a stranger in a strange land," I little imagined the charming affaire de coeur whose progress I was to watch, until it terminated in an Old Virginia marriage.

I apply this epithet to the offering so recently made to Hymen, because all connected with it was so utterly different from the present marriage a la mode; and because its quiet, refined modesty reminded me of the days when the marriage rite was regarded as the public seal to a compact, considered solemn and binding from the first moment of its formation -- not merely an occasion of gorgeous display, much gossip and sometimes, even scandal.

Yet this quiet, little marriage was attended by such romantic circumstances, that you must let me repeat them to you:

The bride, Miss. C. T., was the youngest daughter of Mr. G. W. T., formerly of Jefferson County, and whose family are too well known throughout Virginia, to require further comment, except that he had been a prominent juryman at the John Brown trial.

During the late war, this fact appeared to increase the animosity extended to him and his family, by the Federal soldiers -- indeed, so great were the hardships endured by this family, that it was quite natural their recollections of "the Yankees" should not be the most agreeable imaginable. But they had promised to become loyal subjects to the United States Government, and they would certainly be true to their word; so last winter, when Mrs. T. found it necessary to receive boarders into her family, she accepted the application of a gentleman, actually born in New York, and partly bred in New England. His very complexion, fair and ruddy, proved him a true son of the North: perhaps, like many other Americans, he is descended from those old Northmen, the Danes, who so frequently disturbed the peace of the ancient Britons. At all events, he was now about to imitate the example of the Danes by invading this happy home.

Personally there was no objection to this gentleman, still Mrs. T.'s children could not give him a very cordial welcome, and Miss C. (whose warm Southern heart caused her to feel particularly belligerent towards him) privately resolved to treat him with the coldest civility, holding only such intercourse with him as was required by common courtesy. Little did Miss C. imagine that, through her instrumentality, he was to become what Susan Nipper would term "a permanency," and not "a temporary". However, by the time Spring had arrived, it was discovered that not only had this "young man's fancies," but
also those of this patriotic young maiden, had very seriously turned to "thoughts of love."

Of course everybody now knows the sequel, but during that wonderful period of "engagement," everything was kept delightfully quiet. Even the neighbors had to forego the pleasure of discussing the bride's trousseau, every article of which was nevertheless, thoroughly comme ill faut.

The usual white veil and orange blossoms were replaced by a stylish traveling costume, more appropriate for seven o'clock in the morning, at which hour Miss L. entered the parlor on Mr. S.'s arm, looking as if only a true Northerner could make her happy, so entirely does love triumph over even our national prejudices. But, one word about the parlor. It was literally a mass of lovely flowers, and from the centre depended the grand marriage bell, formed of white flowers and geranium leaves; that wonderful bell, which would, so soon,

"Ring out a slowly dying cause,
And ancient forms of party strife,
Ring in the noble modes of life,
With sweeter manners, purer laws."

And in contrast to the white flowers, there might be seen in the distance a background of dusky faces and woolly heads, belonging to those dear old "aunts" and "uncles," who are often the most truly loved relatives of a Southern child.

Then followed the parental blessing, the friendly congratulations, the hurried farewell, and the next moment two happy souls were whirling up the Shenandoah Valley. I imagine they were rather oblivious to its beautiful scenery, as on such occasions, each soul is supposed to be absorbed with gratitude at having found its "better half " Hoping you may enjoy the report of this little marriage occasion as much as I did the reality, and with many thanks for the patience extended to this long letter, I am yours sincerely,

Eighteen months after the above we have the following from Mr. Pliny F. Southwick's own pen:

My Dear Mother and Friends at home:
I have been trying to gather fortitude to write you again.

Last week I wrote you of the death of our little one only four days old. But now I must tell you that Cornelia too is dead.

They lie side by side in the cold and silent grave *** She exhorted friends to meet her in heaven, then bade us a triumphant adieu, saying, "The angel troop are waiting."

Pliny Fitch Southwick and Cornelia Wilson Tabb.
Pliny died. PLINY FITCH SOUTHWICK went to Northampton in 1866, at the age of 16, and learned the dry goods business, remained there till 1870, then went into business in Freeborn, Minn., with T. A. Southwick; spent two months on the frontier, and then returned to Northampton, Mass., where he became a partner in the store where he learned his business. He afterwards sold his interest and became a commercial traveller for a New York importing house. Was in the dry goods business (1880) in Harrisonburg, Va. 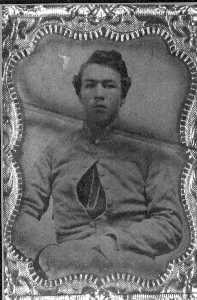 Charles William Tabb
Charles was born at Berkeley County, Virginia, on 5 October 1844.1 Charles William Tabb served as a private in Company G of the 2nd Virginia Infantry, Confederate State Army. He enlisted 28 May 1862, at Winchester, Virginia. He was wounded at the Battle of Fredericksburg on 31 December 1862. He was mortally wounded in action in the thigh at Paynes Farm on 27 Nov 1863, and died in the Confederate hospital at Gordonsville, VA., on 15 February 1864. He is buried in the Thornrose Cemetary at Stanton, Virginia.

His father went immediately after he was wounded to the field hospital; then to Gordensville, staying a few days with him. Then as he couldn't leave his family alone longer took Mrs. Tabb to the hospital to stay with him until his death. We have letters written home by both his parents, and one from Charles himself, all telling how they were passing the time. Mr. Tabb's letter said he didn't think he could survive, but Charles was not afraid to die; he read to him from his Bible, now at Willis', and it strengthened him. Mrs. Tabb's letters seem more hopeful, as that was her natural disposition. Grandma Tabb gave Nell the roll, sometimes called a "housewife", that Charles carried with him in the War. In the center, when rolled, is his very plain knife, fork and spoon, and in the pockets are needles, thread, buttons, hooks and eyes, etc., so he could do his own mending.

Grandma Wilson was in charge of the home during Mrs. Tabb's absence. From her little journal of "Daily Occurrences" I copy these items, which makes it seem more real to us, at this time.

May 28, Charles W. Tabb left home to join the army at Winchester.

June 3, Yankees came and searched the house for Mr. Tabb. He went to town, was questioned and set at liberty.

August 27, Yankees called away from Smithfield.

June 16, 1863, Charles came from Winchester and spent the night. Met the regiment in the morning and went to Maryland.

July 19, 1863, Charles went to Martinsburg with the division. Charles never was home after the 17th of July. He was wounded on the 27th of November 1863. Taken to Gordensville Hospital, and died February 15, 1864. His body buried in the Staunton Military Cemetary February 17, 1864. His mother went on to Lexington on the 18th and arrived home February 27th 1864.

May 9, 1864, Washington (Tabb) was arrested and all his horses and cattle taken by the Yankees. Taken to Martinsburg, where they remained until the 22nd, when he came home. Left on the 23rd to go up the Valley to headquarters to get an order to recover his stock. Was arrested on the 3rd and taken to Martinsburg."

Source: Sketch of Family of WILLIS CREIGHTON TABB from Its
Earliest Beginning in Virginia in 1637 Through Ten Generations
to the Present Time by Mrs. Willis Creighton Tabb - 1935. Charles died on 15 February 1864 at Gordonsville, Orange County, Virginia, at age 19.1 His body was interred after 15 February 1864 at Staunton, Augusta County, Virginia, at Thornrose Cemetery.2