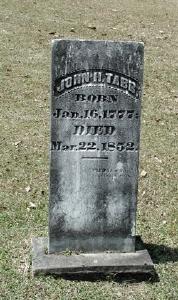 Tombstone of John H. Tabb
John was born at Powhatan County, Virginia, on 16 January 1777.2,3 About 1801, John H. Tabb moved from Virginia to Rowan County, NC, about 1816 to Rutherford County, TN, lived some time in Hardin County, TN, and about 1833 moved to Yalobusha County, MS. He was a farmed and cattleman. He had three borthers: Vincent, Morris or Maurice, and Thomas Hugo, and probably had several sisters.

Records show John H. Tabb bought land in Yalobusha County in 1837 from Elias Gentry, in 1838 he patented land in Chickasaw County, and in 1842 he purchased land under the Treaty of Pontotoc, signed by President Tyler and ratified by an act of congress. We do not know when he came to Mississippi but probably between 1833 and 1837. he is shown on the 1850 Census of Chickasaw County.

Sandy Clinton Tabb (great grandson of John H.) tells the following story in a letter to Albert Elvin Tabb dated October 24, 1937: "Grandpa's father (John H.) was very small of stature, I've been told and at 70 (Seventy years old) one Sunday at church, a little boy had a feisty dog he wanted. So the boy told him if he would climb to the first limb of a pine tree and hook his legs over the limb and hang his head down, he'd give him the pup. The limb was 70 feet from the ground - so the story goes, but our spunky little progenitor took the pup home."

Alexander "Sandy" Tabb
Alexander's occupation: Farmer/Real Estate.. BIOGRAPHICAL SOUVENIR OF THE STATE OF TEXAS by F. A. Battey and Co. 1889

Copies of this book are in Texas Archives and also one original in the Bellaire Library, Bellaire, TX.

Page 809 ALEXANDER TABB, an extensive farmer and stock grower, of Texas, was born in Rowan County, North Carolina, Dec 17, 1809, but was raised mainly in Rutherford Co Tennessee. JOHN TABB his father, was born and reared in Va., but moved to NC, where he married SARAH, daughter of ALEXANDER LOCKE, of Rowan Co., and by this marriage had born to him nine children, as follows- ALEXANDER, JOHN, WILLIAM, DANIEL, ELIZABETH ANN, MARGARET, HARRIET, MARTHA AND SUSAN. From NC JOHN TABB removed to Tennessee, and thence to MS, settling in Yalobusha Co., where he died, in 1853, in his seventy-sixth year- a well-to-do farmer. His widow died in Chickasaw Co., Ms. Oct 20, 1857.

ALEXANDER TABB first moved from Rutherford Co., TN.., to Choctaw district, Ms., before that district was organized into a county, and there lived twenty-nine years, then came to Texas in 1861, where he has since lived. His principal business in life has been farming and stock raising. He has been very successful, and now owns over 800 acres, mostly in small farms. He is a public-spirited, industrious, and enterprising citizen, alive to all the best interests of his community and ready at all times to assist, either with money or his own efforts, any worthy object. He was exempt from military duty during the late war by reason of his age, nevertheless he volunteered his services, and furnishing a team, hauled supplies from north and east Texas to the armies in the Territory and Arkansas.

Most of MR. TABB'S children are now living, are married, and settled off in life, and are themselves the heads of families. MR. TABB has a number of grandchildren and several great-grandchildren.

NOTE; This is a major source because it was written before ALEXANDER'S death in 1896 and has proven very accurate. It is our only source on Alexander's exact birthday and his parents and their parents, also the exact date of ALEXANDER'S and AGGIE'S marriage and her father. jpt

"In the spring of 1861, some ten or twelve white families, accompanied by their slaves, numbering about sixty in all, emigrated from Yalobusha County, Mississippi."

"They sold out their farms, most of their cattle, hogs, etc., but kept their oxen and wagons, a few mule teams, their household goods and enough corn, wheat, and lard to carry them about six months. Headed by Alexander (Sandy) Tabb, they loaded their provender on wagons and trekked north about 200 miles to Memphis, Tennessee."

"At Memphis, they chartered a large flat boat and loaded their families and belongings on it. They went down the river to New Orleans and thence up the Red River to Cypress Bayou and up the Bayou to Jefferson, Texas, which at that time was the gateway to Texas, and the fastest growing town in the state."

"At Jefferson they unloaded from the boat and loaded their families and belongings into their ox and mule team wagons. They trekked over the Jefferson road to Titus County where they were glad to settle down and rest after their journey. The trip as described took them some two months."

"Alexander Tabb and his progeny, some grandchildren and several children, three in laws and families of slaves, settled near Mt. Pleasant. Dr. Burgess, a son-in-law made the trip as the family physician but contracted pneumonia on the way and died soon after arriving."

"Alexander Tabb traveled to Titus County in 1861 from Yellow Bush (Yalobusha) County, Mississippi carrying with him a box of Confederate money, several families of Negro slaves, and $40,000 in gold. It was the gold that enabled him to buy several hundred acres of land in what come (sic) to be known as Union Hill Community."

J. A. Davis writes that "Alexander bought over 100 acres of land and in 1865, donated a tract of land for a church, school, and cemetery. This is what is know as Union Hill, but was originally Tabb's Schoolhouse."

"One Saturday night in 1870, about dark, two men came along the Jefferson road riding east. They well-armed men were from Collins County and were trailing two horse thieves."

"They stopped at my father's (Roland C. Davis, son-in-law of Alexander and father of James Alexander Davis) house and inquired about two men riding horse-back and each leading a mule. They said the men described had stolen the mules and that they had trailed the thieves this far. Father informed them that two such men had passed a bit earlier and had taken lodgings for the night at the residence of Alexander Tabb."

"With father's assistance after dark, Tabb was informed of the situation. There was in addition to the family and the horse thieves, a Baptist preacher spending the night. After father's secret visit, Alexander informed his family, his hired help, the preacher and ex-slaves to stay indoors next morning until the thieves went to the lot (corral)."

"It was Sunday morning. When the two thieves approached the barn, they found themselves surrounded by the two trailers and all the Tabbs who could secure a gun, also the Baptist preacher with a gun."

"When Parker (one of the thieves) saw the trap, he started running toward the road and shooting back at whoever appeared in view. At the first volley from the home folks, the other thief fell pretending he was shot and the posse turned their attention to Parker. Parker got out in the road before he was shot down and captured."

"The other thief crawled under a building, slipped into the woods and made his escape. Parker, thinking he was going to die called form someone to pray for him. The Baptist preacher, who a little bit ago was trying to kill him, had to perform the duty."

"The trailers recovered their mules and went rejoicing home. Parker recovered, hired a farmer, John Davis to carry him home, somewhere in West Texas, and was later killed stealing horses."

"Alexander left Jim (James Alexander, his son) to manage the farm and he came to Mt. Pleasant and bought an entire city block on the west side of Jefferson Avenue and south of Alabama Street. He was active during the Civil War as a 'provisioner', his primary task being to haul salt from Saline Springs near Grand Saline to Mt. Pleasant and Jefferson area, and on many occasions he hauled these provisions on into Oklahoma."

"Alex Tabb continued after the war as a farmer, land trader, and money lender; and in the course of time he accumulated a rather substantial fortune for his day and time. Shortly before his death in 1896, he decided to take his gold and deposit it in a bank in Mt. Pleasant. One of his daughters said they dug up fourteen (14) pounds of gold in the smoke-house and deposited it in the 1st National Bank in Mt. Pleasant."