Every automobile show with all the exotic cars, old and new, brings back fond memories of our 1927 Chevrolet. We were not rich people, but managed to get by quite well. My mother operated a school cafeteria and was able to make a down payment on the Chevy. It was a beautiful four door sedan, blue in color, and words could not describe the elation in our family. It was the envy of the neighborhood. Our first car!

My father, nearing 50, had never driven a car before. My two brothers were too young. My mother never drove a car in her entire life. So it was up to me to teach Dad to drive. The first day we drove to a place way out of town and I let him get behind the wheel for about twenty minutes to let him get the feel of the car.

The next afternoon, when I came home from school, I asked mother where the car was. She said "Didn't you teach Dad to drive yesterday?" He had taken off on his own. I felt ill at ease.

A little later I heard a car bump out front, and I said to myself, "Dad is home!" When I reached the street, Dad had hit the rear of our minister's car, when stopping. Dad was laughing. He had just taken out insurance. The insurance company paid the minister $2.00. It was a retread.

The first summer we decided to leave North Carolina and join with relatives in Virginia on a trip to Niagara Falls, NY. Six in one tiny car (a Whippet, I think) and five in the small Chevy. The trip was a huge success, except for one small incident. We bumped into each other in Williamsport, PA. Some luggage had to be tied to one running board, so only one side of the car doors could be opened. Dad would never buy over two gallons of gas at a time. However, leaving North Carolina for New York, I persuaded him to buy five. Yet, he never ran out of gas except once and he was a half a block from a filling station.

On the trip when we stopped for lunch one day, my mother left a 50 cent piece for the waitress. A few miles down the road, one of my very young brothers, said to my mother, "You left this on the table."

Dad was really not quite used to the car. I watched him carefully lock all the doors and leave the windows open. He laughed when I pointed out his error.

However, Dad drove thousands of miles the rest of his life, without trouble, even though he had one impaired eye. One time in Richmond, VA, he made a poor turn that irritated a taxi driver. The driver yelled, "What are you doing you S.O.B." My mother patted dad on the knee and said "Don't worry Dad, he's just calling out your initials."


I never remember having engine trouble or even a flat tire with that grand car. I only wish I had it now. I bet it would bring a tidy sum at the automobile show. We finally traded the Chevy, after about 60,000 miles, for a 1931 Studebaker, but with all the cars we have owned, over the years, nothing will ever take the place in my heart as the 1927 Chevrolet. 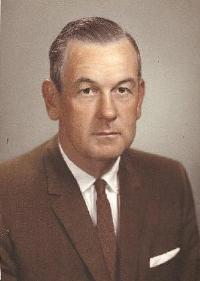 Douglas Cowles Tabb married Susan C. Eubanks. Douglas was born at Newport News, Warwick County, Virginia, on 22 June 1916.1 He married Eleanor Johnson circa 1955. TABB, Douglas C., 92 of Wilson, NC, died Monday, February 9, 2009. He was born in Newport News, Va., and spent his earlier years in the Richmond area. He was president of the Richmond chapter of the American Institute of Banking and moved to Wilson in the early fifties and was associated with BB&T as a loan officer until his retirement. In World War II, he served in the Army Air Corp as a pilot on a B-24 bomber. Funeral Saturday, 11 a.m., First Baptist Church, 311 Nash St, West. Surviving is his wife of 54 years, Eleanor Johnson Tabb; daughter, Debra DeCamillis (Clayton) of Raleigh; sons, Douglas "Rusty" Tabb Jr. (Pam) of Wilson and Bruce Tabb of Eugene, Ore; four grandchildren, Rachel and Erin Tabb and Tabb and Emily DeCamillis. The family will be at Wilson Memorial Service, 2811 Fieldstream Drive, Friday, 6:30 to 8 p.m. Memorials are suggested to the First Baptist Church, P.O. Box 1467, Wilson, N.C. 27894. Wilson Memorial Service, 252-237-7171, www.wilsonmemorialservice.com
This obituary was originally published in the Richmond Times-Dispatch. Douglas Cowles Tabb died on 9 March 2009 at Wilson, Wilson County, North Carolina, at age 92. 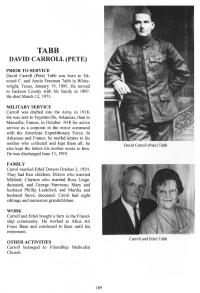 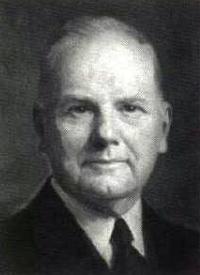 Benjamin West Tabb
He attended Locust Dale Academy in Madison County, Virginia. He graduated from Richmond College in 1901. He was a fullback on the football team. In 1911 he was elected Treasurer and Registrar of the same school. He was a friendly, genial, smiling, cultured gentleman. Benjamin West Tabb married Virginia Underwood. Benjamin was born at Elizabeth City/County, Virginia, on 4 April 1877.1 Benjamin died on 7 August 1941 at age 64. He was buried on 9 August 1941 at Hollywood Cemetery, Richmond, Richmond City, Virginia.