M, b. 3 May 1815, d. 16 June 1886
NOTE: by Jeanette Probst Tabb [of Bellaire, Texas] 5 Dec 1989. According to Tabb Family History this brother would not support the Confederacy. It caused a rift in family. William did not believe in seceding from union. He was too old to fight. Our records show no slaves. In my study of the south in this period, I am finding a surprising number of southerns who did not support the Confederacy. It was truly a time of division all over the nation and in Mississippi is still not healed. Mississippi lost its labor force in its young men and slaves and never has recovered to this day. The bitterness lives on. William and Emily's son George Taylor Tabb came to Liberty County Tx. ca 1895 and became quite a wealthy land owner. His grave in Stilson, Tx. gives his birth place as Houston, Ms. This helped me to help Colonel Jack Tabb of Nacogdoches, Tx. to find his spot in the Tabb chain in Ms. In 1900 Census Liberty Co., Tx., George Taylor stated his father was born in Ga. (1815). This is not impossible, but I thought William was born in Tn. 1815 (probably in Rutherford Co., Tn area according to history of Alexander Tabb written before he died in Mt. Pleasant, Tx.) For this account refer to record of Alexander Tabb. William was born at Hardin County, Tennessee, on 3 May 1815.1 He married Emily Robinson at Smith County, Mississippi, in 1841.2,3 He was listed as a resident in the census report circa 1850. He married Mary Ann Lovett at Smith County, Mississippi, circa 1855.2,3 He was listed as a resident in the census report circa 1860. William died on 16 June 1886 at MontaVista, Webster County, Mississippi, at age 71.1 His body was interred on 16 June 1886 at Webster County, Mississippi, at Lovett-Tabb Cemetery.4 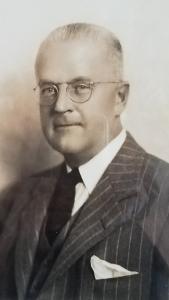 Horace LeFevre Tabb
George, here is what I have on Horace Tabb that I didn't get from your posting.

Born in Martinsburg, West Virginia, Mar. 9, 1887 with no birth defects.

1910 moves from Martinsburg to Portland, Oregon some time between April census and November/December enumeration for 1911 Portland City Directory (released 3/1/1911).

1911 Portland City Directory lists him as a stenographer for the Northern Pacific Railway Co. & living at the YMCA (newly opened in Nov. 1909; demolished May 1978).

1912 - On the evening of March 29, he and four friends are out for a ride on Whitehouse Road near Oregon City, Oregon. One Henry E. "Jack" Roberts, a career criminal, waits in shrubbery for the first car with "young swells" to come by (this was a notorious same-sex lovers' lane). The car owned and driven by Bruce Stewart, 22, is the first to appear. His passengers include Donald Stewart (no relation), 20, Horace Tabb, 25, Irving Lupton, 21, and George Hastings, 22. Roberts jumps out of the bushes with a shotgun, but
those in the car apparently don't notice the gun and don't stop. Roberts
shoots at the car, wounding Irving Lupton in the arm and hitting George
Hastings in the head with the same bullet that hit Lupton. The car still
doesn't stop, so Roberts fires again, hitting Donald Stewart in the head.
Hastings and Stewart both die; Lupton survives. Bruce Stewart and Horace
Tabb are uninjured. A contemporary photograph of Horace Tabb appears with this story in the PORTLAND EVENING TELEGRAM.

1912 - June 13 to July 3 - "Jack" Roberts is tried for the murder of Donald
Stewart. Before and during the trial, information about the relationship of
Irving Lupton and George Hastings comes out; they are lovers. (The
information is given by Lupton himself). Both of the Stewarts and Tabb are
presumed to be Gay as well. Roberts is convicted and sentenced to hang.
Because of a statewide ballot measure to abolish the death penalty, his
sentence is stayed by Governor Oswald West until after the election.

1912 - October 15 - Horace Tabb registers to vote as a Democrat. (His voter
registration card is on microfilm at the Multnomah County Archives).

1912 - November 15 - The PORTLAND NEWS breaks a story of a sex scandal involving the Portland YMCA and a circle of Portland men, some of them prominent. Horace Tabb is arrested within a few days. Another arrestee is attorney Edward McAllister, who had defended "Jack" Roberts in the summer murder trial. (Tabb's docket numbers are J.N. 52589 and 58801, both on microfilm at the Multnomah County Court House Records Center).

1913 - February - Attorney McAllister's trial is held. Horace Tabb is a
witness and is identified as a sexual partner of McAllister's. McAllister
is convicted.

1913 - May and November - The Oregon Supreme Court overturns all of the
convictions in the "Vice Clique" scandal, based on improperly admitted
evidence. Horace Tabb moves to Los Angeles some time this year.

1919 - No Los Angeles Directory was published this year.

1920 - California census lists him as "Howard L. Tabb", address the same,
occupation as salesman for oil industry and a student since 9/1/1919.

1930 - listed as survivor, but place of residence not listed, of father, in
Martinsburg newspaper obituary, March

1937 - Portland newspaper feature on "Jack" Roberts case from 25 years
earlier mentions that Tabb no longer lived in Portland, but gives no more
information on him.


Here is where his trail stops. As I said in my earlier message, I'm hoping
an obituary or death notice for his sister, Irene, from the 1948 BALTIMORE
SUN will state if he was living and where. The Martinsburg/Berkeley County
library looked in the local directory all the way through 1950 and didn't
find him. Horace Tabb is not listed in the Social Security Death Index,
which leads me to believe that he either never had a SS#, or he died before
1962, when the SSA began computerizing its records. (You will note that
there aren't very many pre-1962 deaths in the SSDI).

I am searching for his date and place of death. Any relatives in
Martinsburg who can help with that? Thanks for any assistance you can give.

M
Jesse died. Jesse was born. He married Anne Tabb at Virginia circa 1761.