James Alexander Tabb
James's occupation: Farmer.. He was baptized at Methodist. Religion:. "James Alexander (Tabb) was twenty-two years old and he had been married to Mary Frances Campbell only a few months when the family moved to Texas. He joined the Confederate Army in February 1862 and served in King's Brigade - Walker's Division, F Company - 18 Regiment, Texas Volunteers. He remained in the ranks until June 1864 when he was discharged."

LETTER JAMES ALEXANDER TABB wrote to his sister ELIZABETH JANE BURGESS after he enlisted in the Confederacy. The orginal letter is not in my possession but WILLIAM MARION TABB his son copied letter and kept it in his scrapbook. WILLIAM MARION was my husband's grandfather. He was a newspaper man and for years had a printing shop in Mt. Pleasant across from train station. He kept a lovely scrapbook which we have. We inherited the big round clock from printing shop. My husband WILLIAM ELVIN TABB spent many hours in printing shop "playing" with the type set and printing calling cards, etc. CLARENCE WINN TABB youngest son of WILLIAM MARION and IVA WINN was a journalist with a degree from UT. We have most of his writings from scrapbook. JPT [Jennette Probst Tabb of Bellaire, Texas] 5 Feb. 1990:

Dear Sister: I seat myself for the purpose of dropping you a few lines. I wrote to you and the Doctor about two and a half months age; haven't received any answer as yet. Where are you? Gone to the war? Surely not. What is the reason you don't write? Perhaps you have forgotten me! If so, hope when this reaches you that your memory will be sufficiently jogged to cause a reversion to that place.

This leaves us all well. We have had a great deal of rain here this spring. Corn looks rather bad from the effect of frost of the 21st, though it did not do a great deal of damage. We have about 250 acres in corn, and it looks like making something.

I am going to war. I belong to Capt. Wood's Company, now on its way to Jefferson. Ochitree Regiment. Pa is gone down with them to haul their baggage, etc; consequently I am compelled to stay home until he returns. I expect to start in the course of 5 to 6 days, for three years, or duration of war!

Yes, I now belong to the Confederacy. Many of our kindred, friends and countrymen have already fallen; and if needs by my blood shall run as free as a mountain brook in our country's cause. I am going with the expectation of coming back, back to those that will miss me. But, if it is my lot to die, thank God I have one consolation: "Tis sweet to die in such a glorious cause". Our lot, in all probability, will be assigned to Mississippi, which is the land of my birth, and in its bosom lies the cold silent frame of my mother, brothers four and many kindred and friends. Not resist a foe that is trying to overrun such a country as that? "Tis folly to think of staying at home when our lives, fortune and our sacred honor is at stake; when our peace and prosperity is about to be taken away from us; when our wives and children are menaced with insults; and any lady that falls into the hands of the invading foes basely insulted and cruelly used. I say it is folly to think of staying at home. I had rather died the death of a soldier a thousand times than to live to see my wife and baby, my sisters and friends, of any portion of the Southern Confederacy thrown upon the equality with the thoughtless negores, or to live under Lincoln's administration. Before I will submit to such a government, I will take my wife and babe-- resort to the mountains in Brazil and endeavor to obtain subsistance by gathering roots, etc.

Banishment of victory! Freedom or Death is the motto of

Write soon and let me know how you are getting along.

NOTE; JAMES ALEXANDER was 23 yrs. old 1862. He had been married two and one half years and had one child two months old. One of his father's brother's WILLIAM L. TABB who stayed in Ms. refused to support the Confederacy and it caused a lot of dissention in the TABB family. WILLIAM L. TABB was too old to fight. He was against seceding from Union and did not support the Confederate Cause. JAMES ALEXANDER TABB did fight mostly in MS. and he did return home and have thirteen children, 10 sons and 3 dau. He did not go to Brazil, but was a very successful farmer and stock grower in Mt. Pleasant [Texas] for years. His sons were tall and strong. Most of them living to be in nineties and very healthy. One of them being my husband's father WILLIAM MARION TABB died age 92. James was born at Coffeeville, Yalobusha County, Mississippi, on 1 January 1839.1,2 He married Mary Frances Campbell at Coffeeville, Yalobusha County, Mississippi, on 3 October 1860.3,4,5 He married Dora Dawkins at Mt. Pleasant, Titus County, Texas, in 1898.4 He married Sara Jane Martindale at Clarendon, Monroe County, Arkansas, on 12 October 1908.4 James died on 30 November 1925 at Clarendon, Monroe County, Arkansas, at age 86.6 His body was interred on 2 December 1925 at Titus County, Texas, at Cookville Cemetery. 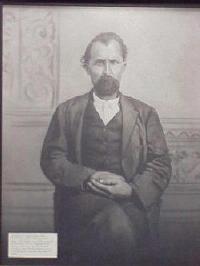 Monroe S. King
Monroe came to Titus County about 1855 from Indiana. He lived near Grayrock. In the summer of 1861, he enlisted in a company known as "Titus Grays". Later known as Company I, Ninth Texas Cavalry of Ross's Texas Brigade. After the war, Monroe returned to Titus County and married Sallie Tabb, daughter of Alexander Tabb. Monroe and his wife settled north and east of Winfieled and bought land on which they made their home.
Monroe was born at Indiana on 1 September 1839.1 He married Sarah (Sallie) Margaret Tabb at Mt. Pleasant, Titus County, Texas, in 1868.2 Monroe died on 18 January 1901 at Titus County, Texas, at age 61.1 He was buried after 18 January 1901 at Masonic Cemetery, Mt. Pleasant, Titus County, Texas.1 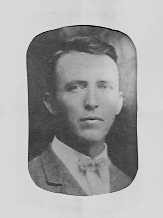 MRS. IVA MAY TABB, wife of W. M. Tabb, passed away at 4:30 Monday morning (Feb. 5, 1951), at the family home, 106 Euclid, following a lengthy illness.
Mrs. Tabb was born in Camp County, but had spent most of her life in Titus County. She was 73 years of age on January 10.
Surviving are her husband and two sons, A. E. Tabb of Texarkana and C. W. Tabb of Houston, together with five grandchildren. She also leaves three sisters and two brothers, who are Mrs. W. L. Homer, Miss Jeffie Wynn and Walter Wynn of Ft. Worth, Mrs. C. G. Stephenson and Preston A. Wynn of Dallas.
Funeral services were held Tuesday morning, at 11:00 o'clock, at the First Presbyterian Church, under the direction of the pastor, Rev. Joe Owen. Burial was in the Union Hill cemetery. Iva was born at Pittsburg, Camp County, Texas, on 10 January 1878.1 She married William Marion Tabb at Mt. Pleasant, Titus County, Texas, on 27 February 1898.1,2 Iva died on 5 February 1951 at Mt. Pleasant, Titus County, Texas, at age 73.1 Her body was interred on 7 February 1951 at Titus County, Texas, at Union Hill Cemetery.3

Albert Elvin Tabb, 85, of Texarkana, Texas, died Saturday at a local hospital following a short illness.
Services will be 1 p.m. Monday at Texarkana Funeral Home Chapel with the Rev. Sammy R. Shrum officiating. Burial will be in Hillcrest Memorial Park.
Mr. Tabb was born June 6, 1900, at Mount Pleasant, Texas. He was a retired partner of F. W. Offenhauser and Company and a member of United Presbyterian Church of the Redeemer and Masonic Lodge.
Survivors include one son, William Tabb of Houston, Texas; two daughters Ruth Deibert of Texarkana and Mary Caldcleugh of Corpus Christi, Texas; nine grandchildren and seven great-grandchildren.
Those wishing to memorialize Mr. Tabb may make contributions to the Texarkana Historical Museum.
The family will be at 2312 Shady Avenue, Texarkana, Texas. Home of daughter Ruth Deibert. 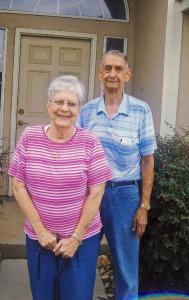 M, b. 1811, d. 28 November 1895
John H. Tabb was a prominent citizen and a successful farmer and sawmill operator, these operations being just southwest of Houston. He was a Mason and served as Secretary of the Houston Lodge.