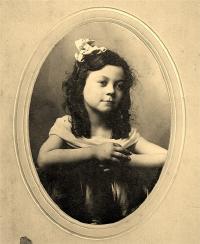 F, b. 14 November 1892, d. 24 October 1991
Clementine, or Tina as she was called by friends........the family called her "Sista", very Southern for Sister, as Arthur was call "Bubba", Southern for Brother and Marion was called "Little Brother". Joe was simply, Joe. Anyway, Tina went to Old Union School along with the rest of the children. It was a one room school with a smaller attached room for the principal. As most children left their schooling early to work in the fields, the classes were quite small; usually about 10 children. Girls made up the bigger part of the classes. Most of them dropped out before the age of 15 to marry or to help with the expanding family of their parents.

Apparently Tina would have none of that. She was thirsty for knowledge. Everything held a fascination for her; science, literature, arts, music. Anything and everything needed to be learned. She stayed in school and at the age of 14, in 1906, she was the only one in her graduating class. Not knowing what to do with a student who stayed in school that length of time, the principal put a desk in the corner of his office and taught her himself. She went to Commerce to take further studies at the age of 15. The teachers college was all that was available to a woman at that time, and she was able to graduate in 2 1/2 years with her teaching certificate.

Tina had read about the need for teachers in the West. She talked her good friend into traveling to Denver where they could teach the children of the fading gold rush. They weren't there very long before her friend was homesick and returned to Texas. Tina stayed on and taught for a while, then moved on to California. This was to become a way of life over the next five years or so. She would teach long enough to earn money to travel to the next point of interest. From California she went to Hawaii. Then on around the Southern part of the globe ending up in Puerto Rico. Even though Tina taught the children. she taught the families, too. And in return, she learned about them. She always stayed long enough to learn all she could about their culture, their habits and their lives. In Ponce, she began to realize she had been away from home for a long time and got homesick. As was her usual mode of transportation, she hopped a freighter and went to America, landing in New York.

From here the story is a little confused. Why she stayed in New York City for the next 65 or so years is unknown. Traveling was curbed with World War I, so getting on to Texas may have been a problem. At any rate, she found a small room with another girl while looking for work. It was a small house and there were a couple of young men on the floor above Tina and her roommate. Tina tells of the dreams they all had. One young man wanted to go into the publishing business, the other wanted to make it big on Wall Street. Since both of the girls had found positions teaching, the boys each held out good propositions for them: One offered stock that would bring tremendous growth and make them both rich in no time at all.
The other had a wonderful idea marketing a magazine for all the world to buy. Tina felt sorry for them both, and did give $50 to invest in the stock, but turned down the other young mans' dream of publishing.
Tina didn't cash in her stock until a year before she died. It was worth little more than when she bough it many years before. The publisher? He founded Readers Digest.

Tina found employment at the Lexington School for the Deaf. She eventually went on staff there as the girls councilor and moved onto the premises. Because the school let out during the summer months, Tina could continue her love of travel. She spent time abroad, the Greek coast being her favorite, and time along the Eastern seaboard. She always went back to Texas to spend a month with her mother and Arthur who was a bachelor still at home. She collected many unusual pieces in her travels, thinking when she retired, she'd move back to Texas and set up housekeeping.

That didn't happen. In the middle 1940's, she had an opportunity to buy a condominium. She asked Marion, who was married by that time with an almost grown family, what he thought of the investment.
Having never heard of a condominium before, he could only answer that real estate was always a good investment. She bought her "condo", about 800 square feet, for $l,500.00 and lived there for the next 40 years. In 1985, she sold it for $l50.000.00. Good investment, indeed.

So she stayed on in New York City enjoying the plays, the ball games, the arts, the travel. She kept saying she'd come back to Texas to die......she just didn't know when to start back! As her peers began to leave or die, she finally went back to Texas, to Waco. She thought she should be checked out by a doctor.......after all, she was getting older. (She had never been hospitalized.) Dr. Shipp met her, checked her out, and told her she was in excellent health. What did she want to see him about? What was her complaint? Well doctor, she said, I just don't have the energy I used to have. Dr. Shipp took a long, lengthily look at her, then leaned over to her face and said, Miss Davis, you ARE 97 years old! Quite honestly, Tina didn't think that should have made one whit of a difference!

Tina's nieces, Dolores and Danna also lived in Waco at that time. Each week, they would have fourth and play bridge. Tina could rattle off the rules and keep them all in check and usually, quite easily, win every hand. She worked the New York Times crossword puzzle daily..........in ink! To keep her mind active, she played Scrabble against herself. She continued to read, to knit and to walk daily until about a month before she died. A series a little mini-strokes took her quickly that last month. Tina didn't like it a bit! She said she still had to go back to Ponce and finish her trip around the world. Had she lived another year, I'm sure she would have......