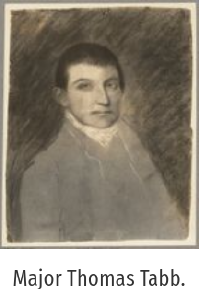 Thomas was called the richest merchant in Virginia and was a member of the firm Rumbold, Walker and Tabb. This company handled tobacco on consignment, imported slaves, built and chartered ships, and carried on an extensive trade with England. He had a number of stores west and southwest of Amelia.

At various times, Thomas Tabb was Justice and Sheriff of Amelia County and was the county's representative in the Virginia House of Burgesses at Williamsburg for a number of years. He rose to the rank of Colonel in the Militia, and in 1758, he was appointed one of the Commissioners for Amelia and Prince Edward Counties to examine, state and settle accounts of provisions, and to pay off militia and damages done to the Colony's inhabitants by the Cherokee and Catawaba Indians.

Virginia had no banks at this time because the Crown and Colonial Assemblies forbade it. When opposition appeared to wane, formation of the Virginia James River Bank got underway, and plans progressed to the point that Colonel Tabb brought metal plates to Virginia for notes that the bank would use. King George II refused permission. All was not in vane, however, for in 1773 counterfeit English notes began to be circulated, and the Assembly approved the use of the Virginia James River Bank notes that Tabb had obtained, after the denomination had been filled in by hand on each note's face, and the back had been printed; there was a provision, however, that the notes were to be replaced by June 1774, by other notes on English paper. Then, in 1775, the notes were used again because of a paper shortage.

Thomas Tabb died on November 27, 1769, at his Amelia County home "Clay Hill" after several years' struggle with a heart condition called dropsy in those days. He was buried in the Tabb family graveyard at his home. His obituary in a Williamsburg newspaper said, "Few, if any, Virginians traded so extensively as he did; none with better credit for character, and by his death the colony hath lost one of its most useful members.

F
She married Col. Thomas Tabb.1 Elizabeth Marianna Mayo was buried at Tabb Cemetery, Haw Branch, Amelia County, Virginia; From the research of Gibson Jefferson McConnaughey gathered from newspaper obituaries and family letters, Elizabeth Mayo Tabb, the second wife of Col. Thomas Tabb, is known to be buried in this cemetery which is located on the property of Clay Hill Plantation, not Haw Branch Plantation. This cemetery is located on private property. There are only 2 graves marked with carved stones. This grave is not marked.2 Elizabeth was born. Elizabeth died.

Philip Tabb inhereted "Toddsbury" from his maternal Uncle Christopher Todd. Philip Tabb served as a lieutenant in the Revolution.

The following letter was furnished to me by C. T. Field, Jr. of Gloucester, Virginia, in November 1993. It comes from the William Patterson Smith papers at the Duke University Library and shows that the Revolution did not quite end at Yorktown in 1781. The letter was written to Col. John Page of Roswell.

I am informed by Lieut. Hudgins that six British Barges cont. about 300 men came yesterday into the thorough fare between Gwyns Island and the mainland at the house of Rich. Brooks who they robbed and from there marched about a mile to Mr Laines. This poor gent. they left destitute of every thing but his house and land taking all his slaves, household goods and wearing appearal. Mr. Hudgins collected about 30 men with which he fired on a Barge that was moving up Sluts Creek. He instantly returned to the rest in the Haven and the whole of them now lie at the lower end of Gwyns Island. I have now to inform that out men have not a round of ammunition left and in this situation we are now exposed to the ravages of perhaps the vilest wretches ever collected in such numbers. Ammunition is all we want to keep them at bay. If that cannot be had we must expect to suffer more from this miserable crew than we have done since the commencement of the War. I wait impatiently to know whether we can be enabled to oppose these Bandits and am in the interim with respect, Sir.

Your most ob. Hble. Svt. 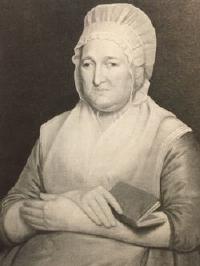 F, b. 25 March 1753, d. 14 January 1824
Mrs. Lucy Cary, the widow of Dudley Cary, of Gloucester, Va., was among the earleiest settlers of Athens [, Georgia]. She was such a lady as we may suppose Mary Washington to have been. She knew General Washington and his wife well as well as most other distinguished Virginians in her young days. Her manners were formed from the best models of Virginia society - gentle, courteous, dignified, cheerful - as kind to one of her slaves as to a white person of the same age; and the result was that her slaves not only loved and respected her but prided themselves in belonging to an old Virginia family.

M, b. 2 July 1760, d. 1 August 1824
John Patterson was the son of William Patterson and _______ Akers. They brought him to this country at an early age, and both died of an epidemic (yellow fever) in Norfolk, Virginia, leaving two sons, John and William. John was only fifteen years of age when he ran away from his guardian, accompanied by William, and offered his services to Washington at Valley Forge, and both were accepted. William was killed at the Battle of Monmouth, and John was breveted by Washington for distinguished bravery. He found and brought William's body from the battle field. His guardian succeeded in having him transferred to the Navy, and he served for the remainder of the War on board ship. He formed a lasting friendship with Commodore James Barron and LaFayette. 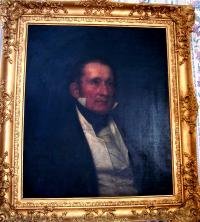 M, b. 15 September 1784, d. 26 April 1860
John Tabb and his brother Philip Edward made considerable fortunes, trading as flour merchants from Norfolk, Virginia, especially during the War of 1812, when they were very successful. After the war, he settled in Gloucester County, and resided at "White Marsh" on the North River. John was born on 15 September 1784.1,2 He married Evalina Matilda Prosser at Norfolk Borough, Virginia, on 18 December 1817.3 John died on 26 April 1860 at age 75.1