M
Jesse died. Jesse was born. He married Lockey Tabb at Virginia circa 1775.

M, b. 18 November 1800, d. 9 October 1894
Langhorne Tabb Sr. who was born in 1800, on Tuckahoe ridge, and died in Dover in 1894, aged 94 years. He was the most prominent, wealthy and progressive citizen of the town (Dover, KY) and was very liberal. He was a member of the firm of Tabb and Lyon, (Gen Anderson Lyon) the largest purchasers of leaf tobacco in Kentucky in the 40's. At that time Dover was the principal leaf tobacco market in the world. Sometimes there were 150 wagons waiting at once to be unloaded. The tobacco was shipped to New Orleans and Boston. Tabb and Lyon purchased 3,000,000 lbs a year. 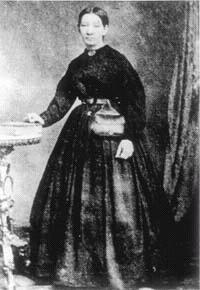 Sally Louisa Tompkins
Sally was born at 'Poplar Grove', Mathews County, Virginia, on 9 November 1833. Sally's occupation: Captain in the Confederate States Army. between 1861 and 1865. When the Civil War broke out, the Confederate government called on private citizens to help care for the sick and wounded, for there was no Red Cross service in those days. Miss [Sally Louisa] Tompkins responded at once, although a boarder at the Arlington, with only her servants to aid her. Judge John Robinson, who was removed to the country, offered her his house on Third and Main Streets [in Richmond, Virginia], and here she conducted the famous Robinson Hospital, at her own expense, with her own servants, for ten days after the battle of Manassas till June 13th, 1865. (Her sister, Maria Tompkins, died early in the war.) The wealth and beauty and fashion of Richmond gathered daily at this hospital, for the Southern women of the sixties were as heroic nurses as the English and French women of today, in their Red Cross service. There, while the beauties of Richmond gave themselves the solemn task of nursing the wounded and dying, Miss Tompkins, "the little lady with milk white hands," as the sick men called her, flitted from duty to duty, her medicine chest strapped to her side and her Bible in her hands ever ready for constant use and comfort of her patients.

Miss Tompkins returned over 1300 men to the field, ready again to do or die, "pro aris et focis;" and her hospital was crowded to the limit by the wounded, who would beg "Take me to Miss Tompkins' hospital if possible." Under these conditions, her fiat went forth, "My hospital can NEVER be too full to hold a Mathews or a Gloucester soldier." When an order was issued closing all private hospitals, she was commissioned captain of cavalry by request of President Davis, and allowed to conduct her hospital to the close of the war. Once after the war, when requested to visit the Johns Hopkins hospital, she was treated with great distinction and requested by the authorities to examine their record of typhoid patients. When asked she replied, "My percentage of deaths from typhoid was less than yours." She was then asked what medicines she used. she replied, "We had NOTHING but whiskey and turpentine." It might have been added, her grand nursing, exquisite cleanliness, and her faithful colored cook.

It must not be omitted that after the war was over she had scores on scores of offers of marriage from men of all ranks in the army, more offers it is said than any other woman in the state of her day, too many to be answered even, but she would smile gently and say, "Poor fellows, they are not well yet of their fevers." She had not the remarkable beauty of the Virginia women of her day, but it was often said that she had "a splendid face" and an appearance of great neatness and refinement, and of wholesome strength of mind and character, supplied the place of some of the more frivolous charms. Her height was not over five feet, but the dignity and force of her presence were not lessened by the lack of inches.

The war being over, Miss Tompkins gave herself with great devotion to church work and attendance. She used to say no one could tell what spiritual blessing might be lost in missing a single service, and her liberality of purse and of personal service were equally devout. Never did she miss a convention of the Episcopal church if possible to attend, and her great hospitality and gift for organization found vent in taking some large house at each convention and inviting all her friends, young and old, to be her guests on these delightful occasions. She was thus constantly surrounded by the elite of her own and other communities, and her humbler friends were never forgotten. In her latter years, her large means were depleted by financial disaster, and when the Confederate Woman's Home was established on Grace street, Richmond, in the old Warwick mansion, she was invited to grace the establishment as an honored guest. The remnant of her fortune sustained her there, and she was the recipient of gifts, honors and attentions from many distinguished persona; especially during Confederate Reunions at Richmond, when the little lady would sit, enthroned as it were, in her chair, and hold daily receptions of men and women of the most historic war record and social prominence. Whenever she entered a convention hall of the Daughters of the Confederacy, the whole body rose to receive her.

The Sally Tompkins Chapter of Gloucester was formed among the early chapters of the U. D. C., and some years later the CAPTAIN Sally Tompkins Chapter of Mathews was formed in her honor. Her family connection is large in both counties. The Deanes, Yeatmans, Dabneys, Tabbs, Taylors, Fahses, Taliaferros, Patterson-Smith, Lanes, Roys and Washingtons were her relatives in these counties besides a host of friends.

Source: Personal History of the Families of Yeatman and Patterson and a few of their connections, by Anna Maria Dandridge Yeatman. This particular writing was contained in a news paper clipping pasted into the work by Mrs. Yeatman. The original is in possession of the Virginia Historical Society, Richmond, Virginia, under the call number 1sM 56a72.

F, b. 27 January 1771, d. 12 April 1788
Marianna was born at Kingston Parish, Gloucester County, Virginia, on 27 January 1771.1 Marianna died on 12 April 1788 at age 17.2 She was buried after 12 April 1788 at Tabb Cemetery, Haw Branch, Amelia County, Virginia; From the research of Gibson Jefferson McConnaughey gathered from newspaper obituaries and family letters, Marianna Elizabeth Tabb, first child of John and Frances (Peyton) Tabb, is known to be buried in this cemetery which is located on the property of Clay Hill Plantation, now Haw Branch Plantation. This cemetery is located on private property. There are only 2 graves marked with carved stones. This grave is not marked.3